As I’ve already written about several times on my blog, it’s always a pleasure to hear Le Vent du Nord perform–although this time, it was on a seriously rainy Wednesday night at the Rogue. Yet the loyal fans filled the place nonetheless!
This time too we actually were without Olivier Demers. If you’ve been following my posts and have seen my earlier Le Vent concert posts, you know Olo’s my favorite of all the members of the group! (And I’m not just saying that because he follows me on Facebook and therefore might actually read this. Auquel cas je dois dire SALUT OLO!)
But this time he had to stay home, due to having a death in his family. :( He posted to his Facebook wall that his father had passed away just a couple of days before the show. (And I was simultaneously very sad to hear the news and a bit relieved to have been warned about it in advance, because if I’d shown up without knowing M. Demers wouldn’t be on hand, I would have been even sadder!)
So Le Vent had to pull in Jean-François Gagnon Branchaud as emergency backup fiddler. If you know Quebecois trad, you may well recognize his name as one of the two fiddlers currently playing with La Bottine Souriante, who also sings some lead on La Bottine’s last album. And if you know La Bottine, you know that anybody who plays for them is guaranteed to bring their A game to a stage. Jean-François did not disappoint, and so even though we all missed Olivier, it was still a delightful show!
Let’s get down to the details, shall we?

Vancouver-based friends Kate and Angela joined Dara and me for this show–the same friends who have also accompanied me to the Rogue for De Temps Antan. And, naturally, we also had and with us, since our compatriots in Canada-based marriage shenanigans consider themselves both honor-bound to show up at the Rogue with us any time Le Vent comes to play. Which meant we had us a nice lively table!
Our table did also of course include Jean-Claude, my mammoth. This time around I felt it was necessary to let Jean-Claude express the room’s sentiments about the absent M. Demers, to wit: 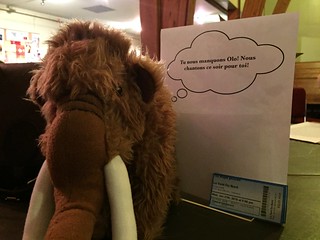 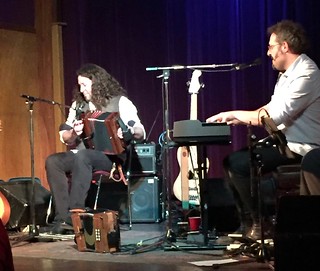 //embedr.flickr.com/assets/client-code.js
“Le cœur en trois” always leads into “Le cœur de ma mère”, of course–and this time was no exception. However, the lead-in for this song was different from what I’d seen the boys doing in the past. This time Nico told more of the backstory of how the song came to be, though he did also drop wry hints that people who needed the lyrics translated might not actually want to get their French-speaking friends to do that for them. (Cue me, of course, turning to Kate and Angela to whisper that this was the song about the guy whose lover demanded that he kill his mother and bring her heart to her, so that she could feed it to her dog. ;D Because I am nothing if not HELPFUL.)
Right around here was when the audience started getting livelier and the dance area in front of my chair started filling up more regularly. (The dance area which, I must add, was helpfully labelled “DANCE FLOOR” via a sign attached to a chair.) Kate started getting up and I boinged up to join her, though I’d been marshalling my energy since I knew “Lanlaire” was coming.
Next, in fact! More stage banter, in which Jean-François lamented “I don’t want to be fired anymore!” And Simon proceeded to inform us that “I am not headstrong! I’m the guy who takes care of the aesthetic!” He was firmly on Team No S in Têtu, in no small part because he felt having no s looked better on the album cover.
And then, of course, we got into “Lanlaire”. Very lively first-set closer, as always. And I was very satisfied to boing and sing the response lines. :D
Then: set break!
When we came back for the second set, Nico started off by asking us “You know a little bit the story of Canada?” And then noting “You didn’t say yes!” He proceeded to regale us with the tale of how in olden times, Canada was a paradise! Tropical trees! Exotic birds! The maple syrup was flowing in the rivers! “And then the British arrived.”
Jean-François jumped in here, too! Just as Nico was lamenting how the British had brought 2 1/2-pound mosquitos to suck the blood of the French, Jean-François tried to get into the spirit of things by suggesting, “All the birds turned into polar bears!”
Nico: “No. Never happened.”
Jean-François: “I’m fired, aren’t I?”
Poor Jean-François! ;)
Anyhow, Le Vent show regulars will recognize this particular tall tale as leading into “Lettre à Durham”. And Nico went on to talk about how the British were all “oh these poor Canadians” (by which they actually meant, “these poor French”) “they have no culture!” And he dropped in a wicked little aside here about how “we really like to do this in England”, too. Muahaha. And a pic was necessary here, too, since sound guy François of course took the stage to take over the bass! 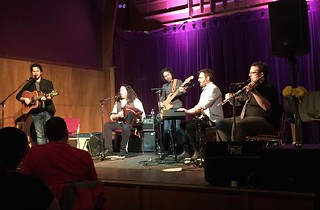 //embedr.flickr.com/assets/client-code.js
Réjean made a point of doing a shoutout for François’s bass contribution and that he does the sound. Which was good, because I know at least some of the audience was wondering who the heck this other guy was! Namely, a couple of the people sitting next to me. So I leaned over to clue them in that that was in fact the sound engineer. Because François is just awesome like that.
Next: another instrumental! This time “Entre ciel et terre”, my favorite of the instrumentals on Têtu. (Which also impressed the other Angela in our group, which I mention for important reference at the end of this post.)
Then Réjean introduced “Toujours amants”, by observing that “in Quebec, we have a lot of happy songs”–by which he meant, happy-sounding songs that are actually about entirely dire topics! This is a phenomenon I am familiar with from Great Big Sea, which after all has the incredibly catchy “Excursion Around the Bay”, all about the singer’s wife drowning and dying. And in this case, “Toujours amants” is all about lovers who have to part.
And it’s the exact reverse for “Le retour du fils soldat”, which I was genuinely surprised to see them break out given Olivier’s absence. Olo carries the low line of the harmony here, about which I wrote in last year’s show writeup. This time it was distinctly odd to NOT have that low harmony, and Jean-François sat this one out as well, so it was a three-parter rather than a four-parter. Nico himself remarked that it was odd for them to perform it this way, too. 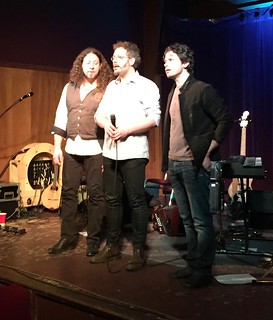 //embedr.flickr.com/assets/client-code.js
After that, though, Réjean brightly added, “I love a happy ending!”
AND–my earlier desire to hear Réjean sing more was satisfied, because he took the lead on “Forillon”. This is the song on Têtu that features a guest vocalist, and I’d kind of wondered whether a) they’d do this one live and b) Réjean would in fact take lead on it. Yay!
With that, though, we got into the final stretch. And as soon as I heard the familiar opening bars of “Rosette”, I knew I was destined to spend the rest of the show on my feet. This time, though, there was a BONUS. “Rosette” led straight into “La turlutte du rang des Sloans”–better known to me as “the second half of Cré-mardi”! \0/ This is one of the very first things by Le Vent that I fell in love with, and I’ve been craving a chance to not only hear them do this live, but to be able to roar back the response lines!
That? That. WAS. AWESOME. :D :D
So was “Vive l’amour”! And for that it was absolutely required for me to fling back my hand and get Dara up and dancing with me, since this is after all Our Le Vent du Nord Song. <3 I am proud to say that we even managed to do a bit of credible swinging one another around on the big instrumental turnarounds between verses! It was beautiful. So was how Nico dedicated this song to the absent Olivier, because he needed the love.
They closed the main set with the instrumental “Mamzelle Kennedy”, and surprisingly exactly NO ONE, even before they’d really properly left the stage, the crowd was fired up enough that we started stomping and clamping for an encore. Somebody might have even called “You are NOT done! Get back out here!” And by somebody, I mean me.
Mischievous lads that they are, they teased us momentarily by holding the curtains open but not showing themselves. But then they did actually come right back out, at which point Réjean went into “La piastre des États” and I finally got some decent shots of everybody on the stage–since by then, I was pretty close. And I had to pause for a breather anyway because I knew what was coming after that song and I needed to pace myself. Here are the pics of the boys from during this song, though!
[AFG_gallery id=’23’]
Last but most assuredly not least: “Au bord de la fontaine”, baby! Nico urged us all onto our feet and we did not deny him. That room was well and thoroughly rocked. And while I was still one of the few voices that actually managed to yell back “Pierre mon ami Pierre”, I damn well did. Go me!
Once the crowd finally began to clear, the other Angela asked me about that instrumental title. And I decided to kill two birds with one stone–and go ask if I could get a pic of the set list, to both answer her question AND have the list for this concert report. It happened that Simon Beaudry was the one I was able to approach about that, and Simon very kindly pulled the nearest set list over so I could see it. I also relayed to him that assorted persons (Dejah, Michelle, and the incomparable Susan) had asked me to send greetings, and he was very amiable and took a few moments to let me chat at him. Merci Simon!
I also took a moment to say hi to Jean-François and to say it had been a distinct pleasure to see him play live for the first time, since I had all of La Bottine’s albums and was familiar with him from those.
Then I pulled Kate and Angela over to introduce them to Réjean and Nico and made a point of mentioning that this was their first Le Vent du Nord show. Satisfying “we hope it won’t be your last!” replies were made! And Réjean also told me he’d seen me up there dancing!
All in all: even though we had no Olo, the evening was still a great success. And I made off with not only another Le Vent shirt, but also one from the Rogue’s own shirt bin. And I got a physical copy of the Têtu disc–since in their capacity as “Anna’s Favorite Band”, Le Vent boys are definitely at the top of the “I Must Have Physical Copies of Their Albums” list!
Next Le Vent show, though, I’ll have to try my cunning plan of snagging a pic with all of them for the top of my Facebook wall. Till then, everybody go buy Têtu, won’t you? I hear rumors that album’s pretty darned good!