This past weekend I had the very great pleasure of being able to attend a small fiddle workshop featuring André Brunet of De Temps Antan! The workshop was held on Qualicum Beach, at the home of the same wonderful couple who hosted the house concert I attended in August 2014. And I was overjoyed to be invited to come back up to Qualicum for this–because as I’d written in that post, for the chance to learn from André, I’d do that long drive again in a heartbeat.
You will notice that this was a fiddle workshop, and that I am still not a fiddle player. But I am a flute player, and moreover, just hanging out in a fiddle workshop was valuable to me as an exercise in hearing assorted tunes broken down into smaller phrases. Even after a few years of trying, I still struggle to keep up in a full session environment. So it’s hugely helpful to hear someone break a tune down into bits that I can then try to reproduce by ear. It works in my brain the same way that trying to read French does. I.e., it lets me better understand the overall structure and feel of a tune. So I will be leaping all over any tunes workshops I can get.
And you guys, this past weekend? Amazing.

Friday: André’s very first solo show
This time, at least, I didn’t have to get up at four in the morning to cross the border. But I did leave pretty early nonetheless, since this was a holiday weekend in the States and I expected traffic to be on the heavy side. Plus, the weather was generally unpleasant. And even though I didn’t need to rush north at top speed, still, I didn’t want to risk getting to Qualicum late!
I had arranged to stay at a very nice little B&B, At Nautica Tigh, which I mention because I totally recommend it if you ever happen to be on Vancouver Island and need a place to stay in Qualicum. The owner was not participating in the workshop, though she’d seen André play before. But she was very close to the Beatons’ house, so it was therefore very easy for me to get to Qualicum, do a few errands, drop off luggage, and then zoom over to the Beatons’ for the weekend to kick off.
And boy howdy, did it kick off. Because André graced us with a delightful little concert that turned out to be his very first solo show ever.
This does sound a little surprising at first, I grant–what professional musician has played for years without doing a solo show ever? The professional musician who’s been busy playing with three, count ’em, three different bands, not to mention duo work with his brother, that’s who. And when one of those bands has been La Bottine Souriante, it suddenly becomes entirely reasonable that M. Brunet has just never had the time to play solo.
Still, though, this didn’t stop our most excellent host John Beaton from making quite a few jokes about André losing his virginity. >:D
What got played included several things that were familiar to me, and several things that were not. I recognized “La ruisseau français” and “L’homme et deux femmes” and some of the material that called back to André’s experience with La Bottine. I did not recognize “Plaid tuque reel”, “Son of a Bear”, or “Reel du Drummondville”, though I have PDFs of the latter two in my collection and will clearly have to investigate them!
André didn’t limit himself to the fiddle, either. I already knew that he could also play guitar, and he deployed that skill for us here. He sang “Le charbonnier” for us, a song I was familiar with courtesy of Les Charbonniers de l’Enfer, to whom André did in fact give a shoutout–along with specific shoutouts to André Marchand, Normand Miron, and Lisa Ornstein!
Though really? We were there for the fiddle, and the man is a firecracker on the fiddle, even when he’s playing all by himself.
Not that it was entirely a solo show the whole time, though. André did recruit our hostess Joyce, herself a fiddle and cello player, and a gentleman named Dave Barta on the accordion, to play trio with him a couple of times! Joyce and Dave both play as part of Celtic Chaos, and their contributions to André’s performance were excellent! Another Lisa Ornstein shoutout happened when the three of them did one of her waltzes.
Here, have a few pics I got!
[AFG_gallery id=’24’]
In between all the songs, André told us a number of delightful little stories as well, about his own background as well as the general area of Quebec he’s from. But what really made me sit up and take notice was how he said that for his next birthday–his 40th–he’ll be giving himself the present of recording his first solo album.
So right then I’ll be buying the hell out of that. Because yep, André’s way up on the list of Quebecois Musicians For Whom I Want Every Single Note They’ll Ever Record. If you like fiddle music at all, you should buy that album too.
Friday after the concert: session!
Full-bore session mode kicked in after André concluded his performance, at which point the rest of us got our instruments out. I was prepared to mostly try to noodle along as best I could, and didn’t expect to be able to pick up much.
Until the part where one of the fiddlers was talking about “Ciel d’Automne”. I.e., one of the few tunes I know how to reliably play, and which furthermore is one of André’s. (This is his lovely waltz on the La Bottine album Xième, known in the States as Rock and Reel.) I piped up a little skittishly, “Uh, I actually know that one!”
So people told me to play it. Again, a bit skittishly, I raised my flute–at this point, I had the little D in my hands–and started playing.
Partway in, a fiddle kicked in right behind me.
Because André had gotten his fiddle, and he was now playing along with me.
You guys, I had a duet with André Brunet.
You may imagine that every neuron in my brain started firing off at that point, demanding that I keep it going. I did. And when I tried to finally stop, Joyce was all “no no keep playing!” because she wanted to take a picture. Which she did, and which showed up a little while later on Facebook, with me tagged. 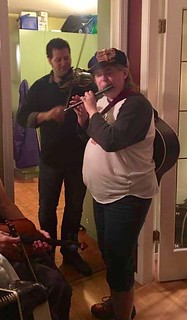 So yeah, I showed up to this thing with a ridiculous number of instruments. And by gods I made noise on every single one of them. \0/
After we finished with the waltz, many lovely words were spoken thanking not only André, but all of us for coming as well. Suggestions were raised that perhaps this will become an annual event–in which case I am 120% on freggin’ board. Suggestions were also raised that André should bring his family! Which would be wonderful.
But before I could finally take my leave, I had a couple more items of business to attend to. Dejah Leger had asked André to bring one of the new De Temps Antan shirts for her (which you can also buy right over here because again, I am helpful). So I had to get that from André before I left!
But he also bought something from me: to wit, copies of Faerie Blood and Bone Walker, after I showed him the dedication he shares with Olivier Demers in Bone Walker. Because I had to make a point of making sure he saw that. Because yep, people who teach me music get books dedicated to them. It’s a RULE.
And one which, after this spectacular weekend, I am even more delighted to get to uphold. <3
It was only with the greatest reluctance that I finally took my leave. Hugs were given to both André and the wonderful Joyce, as well as assurances to the latter that I would email when I made it safely home.
Thanks to Joyce and John and especially André for a beautiful, musical weekend. Jean-Claude and I will be back next year! 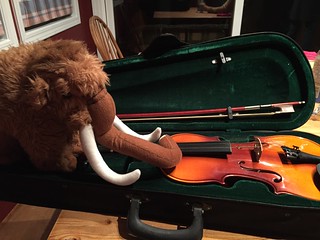