The one major thing I was sad about re: our trip to Quebec–other than the saga of Dara’s lost luggage, and I’ll get to that–was that I got to spend only a few hours in Montreal. And that was only because the travel plans meant I had a bit of buffer time between when I arrived at the hotel, and when I needed to rendezvous with the shuttle going to Camp Violon Trad.
Because, fortunately, there was in fact going to be a shuttle. The camp’s staffer in charge of communicating with campers, when she sent out a notice in June telling us what to expect, mentioned that they’d be running a shuttle from downtown Montreal up to where Camp Violon Trad actually happens. I was quite happy about this news, because this meant I didn’t have to try to rent a car and navigate my way northward through a French-speaking province.
(Note that the street signs at this point probably wouldn’t have given me a problem. I’m good enough with reading French at this point that I can figure out roughly where I am, if I need to. The tricky parts would just be not being familiar with any specific traffic laws in Quebec. Or if I had to pull over for directions, or got pulled over by a cop or something–because then I’d have to try to communicate and my conversational French is not up to speed yet. But that was also part of why I wanted to go to Camp Violon Trad. More on this to come, too.)
What amused the hell out of me about the camp shuttle was this: the designated pickup point was right by the Berri-UQAM Metro station. Which, as it turns out, was about the only part of Montreal I knew anything about, because when Dara and I had spent our weekend there in 2012, that very corner was right by the hotel we stayed at, the Lord Berri.
This meant that I also knew that there was an Archambault there, and I knew there were a lot of shops and restaurants and things within immediate walking distance. So, that gave me at least a bit of buffer time, long enough for running errands and having a brunch, between “leaving the hotel” and “rendezvousing with the shuttle”.
Getting out of the hotel
Getting out of the hotel was a bit of a challenge. I knew that in theory there was a bus I could take from the airport to the aforementioned Metro station, and I remembered that on the way in the night before, I’d walked past a kiosk that looked like it had information for the bus in question. But I got a little lost walking around with my luggage through the airport–which, now that it was a much saner morning hour, was a lot busier than when I’d arrived the night before.
Turned out I’d come down onto the wrong floor. I had to backtrack a bit, but ultimately, found that kiosk. And determined that I had to buy a pass that’d cost me ten bucks (Canadian). This struck me as expensive. But on the other hand, it was still significantly cheaper than paying for a taxi.
The bus in question, the 747 (not to be confused with the jet, lol), had a stop not far from the ticket kiosk. So I got out there and soon enough was on my way.
It was awfully bright that morning, so I had my sunglasses on. This impacted my ability to look at things en route, but I did notice that Montreal was undergoing a lot of construction. Rather like Seattle, in that respect.
Once I was off the bus
The bus route was very straightforward: get on the bus at the airport, and get off the bus at its very last stop. So there was no risk of confusion or anything in that regard.
There was a bit of confusion as I was turned around regarding what street I was on once I was off the bus, but that was easily corrected. I found the Archambault (and the Lord Berri right beside it) as landmarks quickly enough. And that let me orient myself on the plan I had for the morning: go to a pharmacy a couple blocks north of the Archambault, then go to the Archambault, then go find something to eat, and finally, rendezvous with the shuttle.
On the way to the pharmacy (and back again, for that matter) I got panhandled in French. Or at least, one active panhandle and one attempt to see if I spoke French, but which I suspected was a panhandle. I was rather amused by that, just because being panhandled in a different language was at least a bit of a switch.
I was also deeply amused by this, which was not something I expected to see in Montreal. 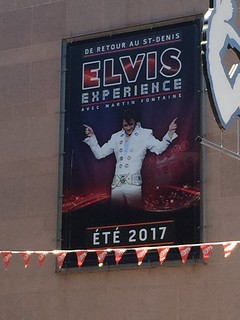 //embedr.flickr.com/assets/client-code.js
Apparently, at least one Elvis impersonator is a big deal there. Ha!
The Archambault was the major errand I wanted to run (the pharmacy was just for necessities). And what I wanted was Tolkien things in French! I nabbed a French translation of The Silmarillion: this one, to be specific. And I bought the Blu-ray set of The Lord of the Rings movies again, but this time because this set actually had French dubs of all three movies. The US releases we’ve already bought–both the DVDs and the Blu-rays–do not have French dubs, which baffles the hell out of me. Portuguese, yes. French, no. To this day I do not for the life of me understand that particular marketing decision!
I amused the clerk at the counter telling him I wanted to practice my French by doing the reading, and by watching the French dubs of the movies. He tried to warn me that The Silmarillion is not exactly an easy book to follow. I assured him that I had read it repeatedly in English, so yes, I was very, very aware. ;D
I’m pretty sure I provided at least a bit of amusement of my own to passersby on the street, just because I was dragging my suitcase around behind me, with my backpack on top of it so I wouldn’t have the weight of it on my back. And of course, I also had my fiddle, which was what I was carrying on my back instead, since it was lighter than the backpack. This led to multiple conversations with people about how I was in the middle of a lot of travel and was on my way north for the next leg of my journey.
Finally I did make it to Juliette et Chocolat, which had been recommended to me on Facebook as a good source of brunch. And which, in fact, I was pretty sure I’d remembered going to in 2012. The brunch was in fact excellent. So was the dessert, a thing called “petit pot fleur de sel”, which was all chocolate-mousse-y and salted-caramel-y and gracious that thing was tasty.
Eventually I wandered around as much as I felt I was up for wandering around. Half of me really wanted to go to the Café des chats, one of Montreal’s cat cafes, but it was just a bit too far of a walk when I was hauling luggage around with me. So I finally just parked for a bit at the corner, sat in the shade, and hung out playing Gummy Drop on my iPad; while I was doing that, I had another random conversation with a gent amused by my stack of luggage.
That didn’t kill enough time, so I got up and wandered off again to go into a nearby coffeeshop for a cold beverage and a visit to a ladies’ room. And that accomplished, I came back again and finally found some folks waiting in a little cluster with violin cases and other luggage.
I’d found the Camp Violon Trad crowd!
Waiting for the shuttle
I discovered to my surprise that I was not actually the only person from the extended Seattle-area session crowd. One of the other ladies waiting for the shuttle was another Seattle person. So that was awesome to discover. :D Turned out we had a bit of a wait on our hands, once we greeted one another and exchanged names and such. None of us were particularly sure which corner the shuttle would be showing up on, or even what kind of vehicle we were looking for.
It was a good thing for me that there was public municipal wifi available, though, because that let me check my mail–and find an update sent out by the camp coordinator, Ghislaine, warning us that there had been a bit of a mixup as to vehicle rentals, and that there would be two drivers coming, but one was running late. Which ultimately meant that there’d be two cars for about six passengers, so we had to divide up who would ride with which driver.
The driver I rode with was a fellow named Luc. Who, as it turned out, is André Brunet’s cousin! He was very nice, and told me and the other two ladies riding with him that he taught English. The route he chose to take northward was a bit random, since he wanted to avoid the tunnel that runs underneath the St. Lawrence river, which is often very crowded. None of us minded, as it was a pleasant drive. I amused myself practicing reading signs we went past, as well as keeping up with the bilingual conversation going on in the car.
Once we made it to St-Côme, I was able to observe that it is a) tiny, and b) kind of adorable. The same applied to Plein Air Lanaudia, the site of Camp Violon Trad. There was a lovely lake there, a bunch of trees, and assorted chalets that we were all staying in.
But more on this in Part 3 of the trip report!