This weekend I engaged in my lightning-strike road trip up to Canada and back–specifically, to Qualicum Beach to attend a music workshop, house concert, and post-concert session, featuring my boys of De Temps Antan!
Which meant I got up at 4:30am on Saturday morning and spent pretty much all of the morning in transit in order to get to Qualicum in time for the workshop. And I spent pretty much all of Sunday in transit home. But the time in between? Stupendous levels of awesomeness, and worth every minute of the hours I spent on the road and on ferries! For the chance to learn more tunes from André Brunet, I’d do it again in a heartbeat.

Saturday morning: British Columbia is BIG
So yeah, as mentioned, up at Stupid-o’Clock. I was out the door shortly after five, and discovered pretty much what I was expecting about traffic at that hour: which is to say, Ballinger Way and I-5 are pretty devoid of vehicles before 6am on a Saturday! I made excellent time and crossed the border shortly after 7. Only about a ten minute wait. Best crossing I’d had in a while!
Paul loaned me his Garmin, and between that and printed-out directions from Google Maps, I fortunately didn’t get lost. And I needed those directions since I managed to completely confuse the Garmin on the way up to Qualicum, once I got off the boat. Which was a ferry to Victoria–I was going to take the ferry to Nanaimo until I discovered that that one runs only every three hours, and that BC was having a holiday weekend. But the ferry to Victoria had reservations open for the 9am ferry, and I was not, under any circumstances, going to risk missing André’s workshop.
Turns out though that I got to Tsawwassen Point just before 8, and even though my reservation was for 9, they let me on the 8am boat anyway. And so I got off the ferry in Victoria around 9:30 and proceeded to head up the island towards Qualicum. Directions-wise, this worked a lot like my and Dara’s trip to Cumberland to see Le Vent du Nord–I even wound up stopping at the same Dairy Queen we stopped at before, for a pit stop. The only difference this time was getting off BC-19 earlier!
Made it into Qualicum around 12:30ish, only to discover that crap, the RBC was closed. This was a wrench in my plan for getting Canadian money for purposes of paying for both the workshop and the house concert. Fortunately though the ATM was happy to accept my debit card, even though it charged me two bucks for the privilege, and I got dinged for a foreign transaction as well.
Then I strolled around the town center for a bit, got some yogurt, and visited a couple of the local shops. Had a lovely conversation in the bookshop asking about Canadian authors, and unsurprisingly, being ME, I walked out with a couple of books. Also picked up some nice handmade soaps from another shop as well.
And, since I have come to the conclusion that if I’m showing up for an event involving Quebec music I must bring Sortilège, I ducked into the nearby BC Liquor to do that too. Only to discover that they did not have any of this particular elixir of the gods–at least not the maple whiskey form. They DID have the form that’s more like Bailey’s Irish Cream, only maple-flavored. I was perfectly happy to buy that instead, since I hadn’t tried it before.
Then it was finally time to show up for the workshop!
Saturday afternoon: André Brunet, Professor of SWING! 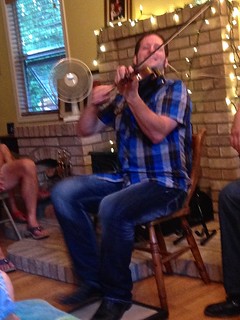 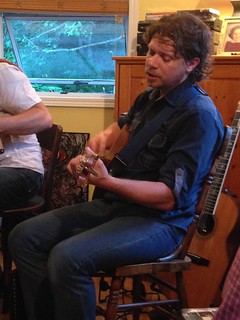 //embedr.flickr.com/assets/client-code.js
I’m pretty sure it was here where the boys backtracked to introduce the songs they’d just done, before heading into introducing “Pu d’argent”, which they identified as being from Éric’s family. And certainly, sitting at Stage Éric (never mind the lack of actual stage) did not suck.
Then they finally jumped over to the current album, Ce monde ici-bas, to break out “Refaire le monde”. This one’s fun just because they all get to take turns singing parts of it, which is a fabulous thing to do when you’re a trio of strong singers.
Another instrumental set followed, at which point the lady sitting in front of Ian (and who was therefore just in front and to the left of me) broke out her spoons and kept excellent rhythm. She kept doing feet, too, and she wasn’t the only one. I didn’t have much room to do feet with a chair in front of me, so I wound up using my hands instead.
And then, oh my yes: “Adieu donc cher cœur”! Éric introduced it by saying it was about a woman named Hélène, and asking if there was anyone in the audience with that name. Answer: yes. Wry replies followed! And this there was a bit of extra harmony in the turnover going into the third verse that doesn’t appear in the studio version, to wit, yum. (Also um yeah I might possibly have been playing the hell out of this song, with ulterior motives of wanting to learn it. As became pertinent later in the evening!)
After that André stood up, and amused us all by doing some rather Elvis-esque leg shaking. You may assume, O Internets, that yours truly found this entirely acceptable. Pierre-Luc and Éric then also stood up, and while André introduced “Valse St-Sévère”, kept making little lovebird-y whistling noises. And they were all amused to call this tune an “expensive waltz”.
Note: crowded though the room was, this didn’t stop Ginny and Gary from getting up to dance in the corner. Aww. <3
Then another instrumental set to close the first half of the show! At which point I scampered off to the kitchen to break into the Sortilège, and several folks perked up with interest when I kept describing it as “like Bailey’s Irish Cream, only maple”. That went over very well.
When someone dimmed the lights to warn us all to come back to our seats, the second half of the show began! And André went over some of the same stuff he’d told us during the workshop–to wit, how his father was a guitarist and his mother an organist, and that his father and his uncle had married a pair of sisters. So his favorite band was in fact his family, and his father and uncle had been the first edition of Les frères Brunet. Awesome!
Then he asked Pierre-Luc to elaborate on his own background. Pierre-Luc proclaimed that he’d learned music from two bears in the woods, so of course Éric had to jump in with how he’d learned music from wolves. André then claimed “ducks” as his source of instruction, which just goes to show you that in Quebec, even the animals are musical. (This may also explain the high number of ducks I keep spotting in Quebec trad lyrics!)
Next then was “Medley des couches”–what the boys describe as their Diaper Reel, since it was inspired by their all becoming fathers in the same year. Now me, I do have a bit of background changing diapers, having done so for my little sisters. And that wasn’t so long ago that I don’t remember what that was like. All I gotta say is, had I known at the time that changing diapers could lead to music, I would have enjoyed the entire process lots more.
Pierre-Luc threw a very spicy harmonica solo in there, too. 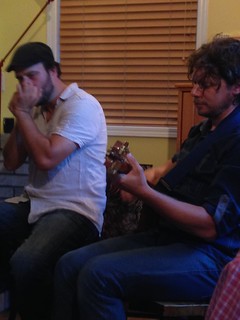