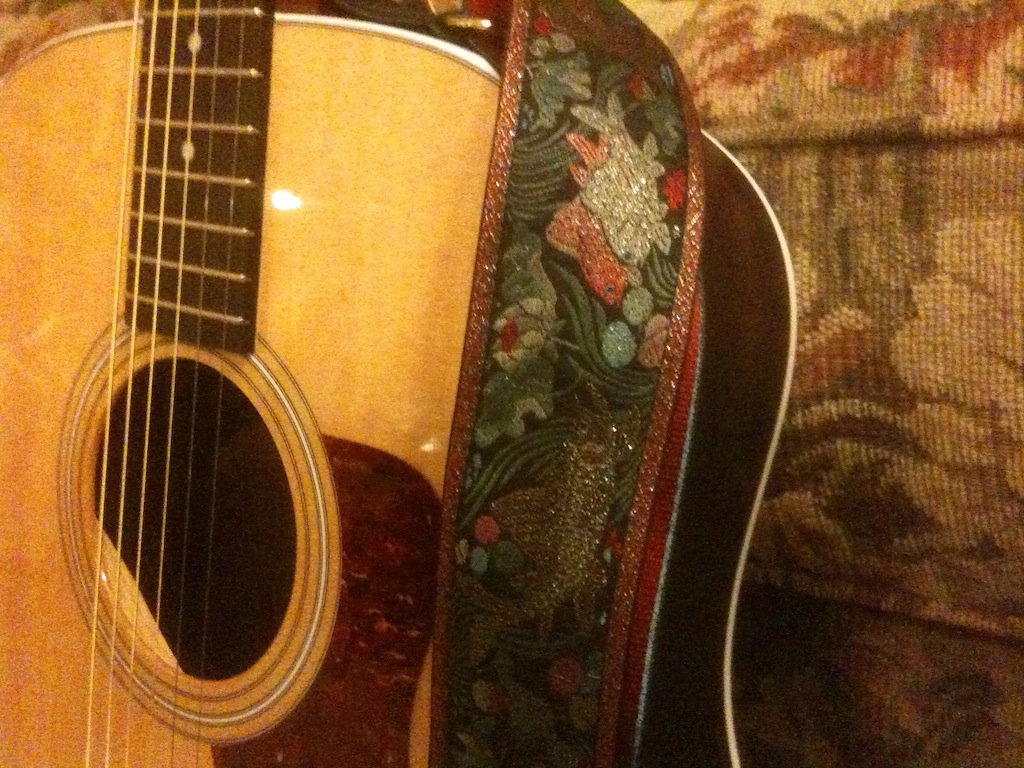 Ladies and gentlemen, as promised, today I went with my beloved to Dusty Strings and got myself a shiny brand new guitar! It took a bit of deciding, especially given that the place was a madhouse (they were having an open house and concert and they were packed wall to wall with people), but I ultimately settled on a Taylor 210.
Description of the afternoon–and most importantly, PICTURES–behind the cut!

That they were so busy was a bit of a shock and not entirely welcome, exactly; Dara and I were really rather looking forward to a nice casual afternoon–me of communing with the instruments so I could find the right one, and Dara of working on some songwriting. What we got was a place very full of audience members as well as a horde of folks listening to the performers. Who were, it must be said, quite good, and certainly everyone seemed to be enjoying listening to them. Plus there were cookies and cider back in one of the back rooms, so it was nice to have something to grab to nom while I was considering which instrument to get.
But still, a LOT different experience than I was expecting. One of the Dusty Strings staff, though, gamely helped me out as best she could in between doing her duty at the register and with all of the rest of the customers. She tucked me back into a Quiet Room where I could actually hear myself play, and even though it was a tiny little closet of a room with barely enough room in it for me and Dara, our stuff, and two guitars, that did at least let me go ahead and try out some instruments.
I also explained to the staffer (whose name was Sarah) what I wanted in a guitar: a step up from just a basic starter guitar, with a good strong sound to it. I liked the 3/4 size of Rags but it was not vital to keep to that; mostly I was aiming for “decent low-end guitar”, and under a thousand if possible. I could very, very easily have gone higher, but I was trying not to blow too much of my bonus in one go. And also, while I’m a decent enough rhythm guitarist (with a very limited repetoire), I’m not a professional by any stretch of the imagination. So I do NOT need a high-end professional grade guitar.
A decent low-end one, though, now we’re talkin’.
So I had Sarah grab me the Seagull S6 Slim since that was the one I knew I wanted to check out to start with. Bonus points there for being a nicely inexpensive guitar, and extra for it currently being on sale! To put up against it, Sarah recommended a Martin D-1, which was reasonable to me, as it was at the top end of how much I was willing to pay.
And that was a very interesting comparison. Turned out the Martin had a much nicer deep end to its sound, while the Seagull had a superior high end. I thought very hard about it and decided ultimately that I preferred the Martin–but I didn’t want to choose it without giving a couple others a fighting chance.
So I tried a Seagull Entourage Mini-Jumbo as well. This one was a very attractive guitar, I’ll give it that. Sound-wise, though, it was no contest against the Martin. And honestly, it wasn’t quite as cool as the S6 Slim, either. That made me start thinking, okay yeah, it’s probably the Martin.
I grabbed Sarah one more time in the midst of the open house crush and told her that the Martin was probably a contender–but did she have anything else of a comparable quality and price range I could look at? She then pointed me at the Taylors, and I wound up grabbing the 210. I’d remembered as well that had mentioned that had spoken well of Taylor guitars, so I half-figured I’d be looking at those at some point anyway.
As soon as I got the Taylor into the Quiet Room and started playing it, my immediate thought was “hey, NOT BAD”. It combined the nice high end on the S6 with the nice low end on the Martin, even though it had a scooch less resonance than the Martin did. What really sold me though was when Dara had me turn around on the stool and play in the opposite direction, so that the sound would bounce off the padded wall behind her rather than off the wall and mirror on the other side. That totally changed the character of the Martin’s sound; its high end just about vanished, while the Taylor maintained a decent balance between the upper and lower ends of its range.
One more dash out to find Sarah let me know that Dusty Strings didn’t carry Alvarez guitars, the only other brand I wanted to ask about (since the guitar buyer at Mills Music in downtown Bothell had pointed me at one of those and I wanted to compare). Therefore, the Taylor it was!
I was quite, quite impressed by the quality of the gig bag that came with it as well, a nice thick padded thing with several pockets on it, which will be nice for going to local conventions. And I bought it its own strap and a couple sets of strings and a bunch of picks. And we called it a GUITAR and scampered homeward (after running a couple quick errands) so that I could PLAY IT.
It’s really kind of stunning how much more aural presence than Rags this thing has. I mean, it stands to reason, because it’s a bigger guitar–but still. Playing it in our living room is an entirely different experience, especially if I kick into Great Big Sea’s livelier things, like “Mari-Mac”. This guitar? WORTHY OF MARI-MAC.
Now I just need to get used to having my fingers in slightly different positions, to playing on steel strings, and having the shoulder strap connecting on a different place on the instrument! (I REALLY like that the left end connects further down on the body of the guitar, rather than tying off around the neck like Rags’ strap does.)
And last but not least, ladies and gentlebeings, I give you PICTURES.